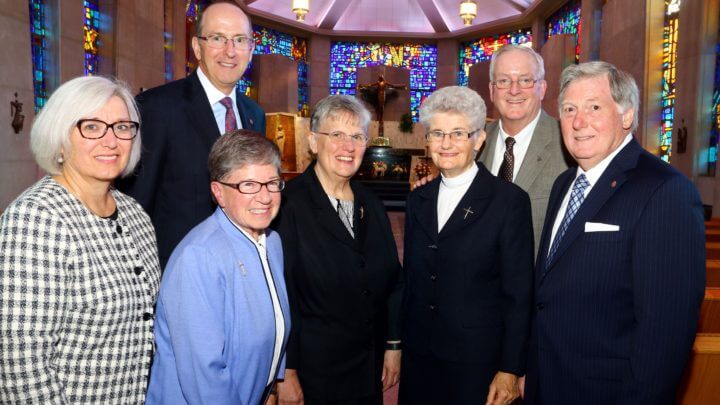 The Sisters of the Redeemer announced that they have taken a significant step forward to ensure that Holy Redeemer Health System will maintain its Catholic identity well into the future. They have officially transitioned their sponsor role of the Health System to a new sponsor officially erected by the Vatican, called Redeemer Ministries.

This move allows prepared laypersons to have oversight in ensuring the Health System remains Catholic, follows all Church teachings, and continues to promote and assure Jesus’ healing mission in the charism and spirit of the founding Sisters of the Redeemer.

“Establishing Redeemer Ministries as the new sponsor is the result of over a decade of the thoughtful planning and preparation of many,” said Sr. Ellen Marvel, CSR, Province Leader of the Sisters of the Redeemer’s U.S. Province. “We have always recognized and valued the critical role lay partners in mission play within our ministries. When looking at the Sisters’ future as well as the Health System’s, transitioning our sponsor role to include lay people was the logical next step.”

Increasingly, Catholic healthcare has become more of a partnership between laypersons and women and men religious to better support healthcare organizations’ many complexities. In addition, the Sisters of the Redeemer, like most religious congregations, have seen their numbers decline in recent years while some of their new members are involved with ministries other than healthcare.

In 2011, the Sisters of the Redeemer instituted a pilot sponsor model where laypersons were invited to discern a call to serve in the ministry of sponsorship along with elected leaders of the Sisters. Prospective sponsor members committed to formative education for this role. This positive experience has culminated now in the institution of Redeemer Ministries. The Sisters received notice in June of the Vatican’s official approval of this new public juridic person (PJP), which is a body authorized to act on behalf of the Catholic Church.

“Called by the Spirit of God to be a healing presence in a suffering world, particularly to poor, sick, and vulnerable persons, the Sisters have built a remarkable legacy with their ministries,” said Dan Gallagher, President of Redeemer Ministries. “Their impact is seen throughout the Health System and in the communities we serve every day and will continue for generations to come. I am incredibly humbled and thankful to be able to partner with the Sisters in this critical role.”

A transition period to ensure a smooth change of authority is planned, and a special Mass will be held to commemorate this important development.